Seven shows in three weekends seemed like a pretty big undertaking for Team REPAIRS – but unbelievably the tour flew past in a whirlwind of awesome people familiar and new, awesome bands, and awesome hugs. And of course a band T-shirt or two!

So… better late than never, here are some (actually not very) brief – but important – tour facts and band musings.

This is our first time playing the legendary Nivara Lounge, and we’re a wee bit nervous – but owner Ivan and soundperson Rick immediately put us at ease. This venue is AMAZING; with cool retro furniture and fantastic sound. We’re playing with Cartoon Villain, who bring fuzzy, heavy goodness through quite frankly the most beautiful red guitar we’ve ever seen; and Landlords, who are a bit like if Slowdive had an illegitimate child with Swervedriver. And that child was now an angsty teenager. Swoon.

Sweat factor: 3. It’s pretty stinking hot in the ‘Tron – so much so that even Nic is glad she wore a sleeveless top.

Highlights: Wai of Cartoon Villain and James doing an impromptu cover of “Colossus” during soundcheck… and Martin starting recording right at the last chord. 😂

After the kerfuffle that is trying to check in at Auckland Airport, Jetstar get us and our gear down without a hitch (RESULT). Dunedin is, however, damp AF. Yep, it is PISSING down.

We pick up our rental car, and after a small detour to pick up a new pedal (a RAD made by Pepers’ Pedals), it’s off to meet our good friend Dave (who’s also the bassist in EVIL KID). This is the first time any of us have seen EVIL KID or Diana play, so we’re super psyched.

Dee’s is a super cool small venue – café upstairs, with a cellar type space downstairs where you can totally imagine NY-style comedy or open mic nights taking place. Owner Dayna is the loveliest, and straight away is simultaneously on the hunt for beers and spare mics. We also meet Sarah, who’s practising gig photography and offered to take some snaps of the show – which turn out amazing!

EVIL KID and Diana more than make up for the crap weather, bringing the party to Dee’s – and by the time we go on, we’re ready to BRING IT.

Sweat factor: 4. The weather might be dreary, but holy scheise Martin is the epitome of energy – blink and you’ll miss him. Although he does somehow manage to hit James with a drum stick… 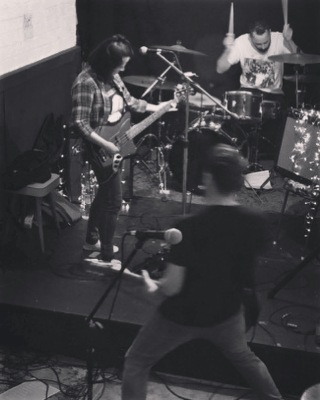 ROAD TRIP! The drive to Christchurch is surprisingly pleasant, and thankfully uneventful. IDLES’ JAAAOR features on the playlist (naturally) and we arrive at darkroom in good time. Marcus welcomes us with a much-needed beer and we set up and soundcheck.

Next door is Christchurch’s newest record store Ride On Super Sound, which is the most amazing space – zines, music, T-shirts, and there’s even a lathe cutter! There’s time to geek out (and make some purchases) before we need to be back on the door.

BEST BETS play a high energy, pretty much non-stop set that includes an amazing cover of “Game of Pricks”, while EVIL KID continue to keep the atmosphere joyously buoyant. We end the night on an absolute high. 💖 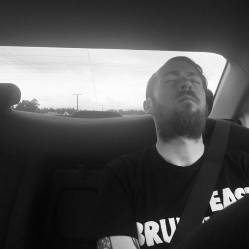 Sweat factor: 3. It’s a small stage, but we’re on a three-show buzz and boy-oh-boy are we going to nail that set.

Band T-shirt count for the day: 3. East Brunswick All Girls Choir, June of 44 and carb on carb.

Highlights: Our beautiful friend Dave of Flogging a Dead One Horse Town flying down from Tauranga, and surprising us and his bandmate Tim. ❤ And the REPAIRS/FADOHT celebration-fest for Tim’s birthday!

Weekend two, and it’s down to mighty Tauranga.

YAY! James’ fiancée Fe is joining us for the weekend road trip!
BOO! Nuggiez have to pull out at the last minute. (To be fair, Martin *does* try to make it up to the crowd by playing a couple of Nuggiez bass line solos.)

Tonight’s venue is the cool AF Voodoo Lounge (formerly known as Arcade), who – life tip! – do AMAZING tacos and chips. There may only be two bands on tonight, but Hemordroid absolutely kill it – and the crowd love it.

SHOW 5: Wellington w/ I Love the Sea and First Move

It’s a loooooooooong drive to Wellington, so thank goodness we have IDLES to get us through the Desert Road. But it’s always an absolute delight seeing Harry, Jono and Fraser from First Move, and there’s hugs all round when we finally get to the venue, Caroline. The staff are lovely, making sure that we’re able to get some food before the show, despite the kitchen being closed.

I Love the Sea are first on, and their set is beautifully lo-fi with some unexpected heavier moments. Absolutely amazing. And of course, First Move absolutely naaaaiiiiiiiil eeeet.

(Major props to James Goldsmith for the stellar sound on the night.)

Band T-shirt count for the day: 3. IDLES, The Beths and carb on carb.

We love playing The Wine Cellar, and we’re super excited for reasons: 1) no driving! 2) Cat! Cat! Cat!’s first show in over a decade! 3) Rohan is doing sound! 4) did we mention no driving?!

With the beautiful Tove expertly taking care of the door, things kick off with Cat! Cat! Cat!, who get the night off to a great start. You’d never for a moment think that years had passed since their last show, and there’s definitely a dancing feeling in the air! 💃🏻💃🏻💃🏻

After some technical issues, Swallow the Rat bring the noise – and then some. They play some new material too, which is sounding fricking rad AF. We can’t wait to hear their new recordings!

Sweat factor: 3.5. OOOOoooooooofft but it’s hot up on there tharrr stage!

Band T-shirt count for the day: 2. IDLES and Swallow the Rat.

Special mention to: James for making the epic visual slideshow that got projected during our set.

Road trip, take 2. Yep it’s another looooooooooong drive – which almost stops before we reach Cambridge when James texts to say his flight has been cancelled. One (minor, honest) panic later, he’s confirmed on a later flight, and we rumble on down the road.

The venue at Palmy is beautiful – part of an amazing gallery space that’s still serving food in the cafe when we arrive to set up. As always, it’s fantastic to see the First Move guys, but it’s also a wonderful moment seeing Jeremy  (aka Distance) and Chrisana again for the first time in over 5 years.

Everyone is in good spirits, all the bands are AMAZING, and the general atmosphere is one of awesomeness. What a perfect way to end the tour. 💖

Sweat factor: 3.5. It may be hosing it down outside, but the energy (and lights) on stage is more than capable of creating a cosy room temperature.

Band T-shirt count for the day: 2. carb on carb and Mourn.

Can’t wait to do it all again!!
REPAIRS xo

The band that tattoos together. ❤️